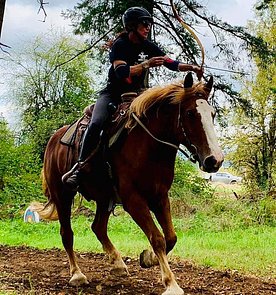 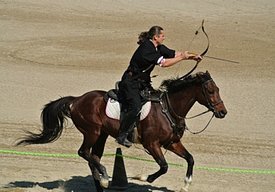 Fraser Valley Mounted Combat is excited to bring Horse Archery and other Equestrian Arts to the Fraser Valley of beautiful British Columbia. Our goal is to bring the highest calibre instruction possible to our students in both arms and in horse back riding. We are delighted to work with International Mounted Kassai Archer, Robert Borsos. All riding instruction is by a nationally certified coach and is focused on correct technique and position not only to be competent in the saddle but also highly effective in all situations.

Steph was certified in France as trainer of sport horses 1996 and as a Nationally Certified (NCCP) English Riding Coach in 1999. She is a full time coach and trainer. She has spent most of her career focused on foundation training in both the young horse and troubled horses as well as for riders.

In 2014 Stephanie created Fraser Valley Mounted Combat after discovering the world of Historical Equestrian Martial Arts in 2013 through a client. She wanted to be able to host clinics closer to home as well as create a safer environment than what she was seeing. Steph successfully completed Duello's Level 1 Instructor Intensive in Italian Rapier and Italian Longsword in 2017.

In 2018 Stephanie pushed through the first insurance policy covering Horseback Archery in Canada and was subsequently invited to sit on the board of the Canadian Federation of Mounted Archery (CFMA) to help them get insurance after it had been denied in the country for 15 years.. Getting insurance was a game changer for the sport in Canada. Horseback Archery. Clubs are now flourishing all over the country thanks to the CFMA club insurance now available to Canadians. Steph also began competing internationally that same year. THe year 2019 involved much travel to train and compete. Steph still trains with and is a member as well as instructor of Borsos Torzs in BC as well as a member of Broken Arrow Mounted Archery in Washington.

In 2020 Stephanie became the second CFMA certified Horseback Archery Instructor in Canada. These are programs she heavily influenced through her discussions with Equestrian Canada's coaching development. She is proud to have gotten all the aspects of Safe Sport (Sport Licensing) included in the program and looks forward pushing for the development of programs that will allow Equestrian   Archery to  become recognized in Canada as it already is in France and the UK.

Robert is the head of Borsos Torsz and President of the Canadian Federation of Mounted Archery and the only certified Kassai Instructor in Canada. He is also an International Judge of the Original Kassai System. He represents our country all over the world and recently brought home team silver for the serial 5 shot in Korea with his Torsz